The Chilean singer-songwriter, Alberto Plaza, was very overwhelmed, and touched by recently s

haring with the victims of the earthquake that took place in Peru. In this country, he visited Pisco, where he inaugurated the Primera Casa de la Solidaridad (First House of the Solidarity) for those affected by the disaster in the area, and days after that he offered a sensational supportive concert in Lima.

The singer-songwriter arrived in Pisco along with the Minister of Women and Social Development Virginia Borra, inaugurating in this city the “Primera Casa de la Solidaridad” in Villa Tupac Amaru, a place that will hand out food daily to more than 50 families, victims of the earthquake.

At the site, Plaza shared with the residents, and personally gave away the first food rations to children and women who lost everything in the earthquake. Moreover members of the I Will Change the World Foundation, from the Peruvian headquarters, came along in this solidarity visit.

“This tragedy cannot leave anyone indifferent. Here are people who lost everything, and each one of us has a role to play. I do it through my songs, placing them at the service of this humanitarian work. I call to not forget Peru, because help is still necessary”, said the singer-songwriter from Miami.

Alberto Plaza ended his visit to Peru in a spectacular concert for the “Brotherhood and Solidarity” that took place in Lima on September 20th. In the concert, where he featured with the Peruvian artist Pedro Suarez Vertiz, part of the proceeds went to a fund for helping the victims of the earthquake. 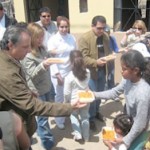